» American Iron US Results and Standings

Yesterday at 3:41 by THR Flipmode

Yesterday at 2:36 by SFM Darkzer

Zengő Motorsport is a Hungarian motor racing team founded by Zoltán Zengő and when it comes to Forza Motorsports 6, they got the rough end of the deal, so we at VTCC have decided to take their #5 WTCC Honda Civic on a Tour of America.

A big part, certainly from a British point of view was the inclusion of a selection of cars from the BTCC and WTCC, which meant every site and its dog has run a Touring Car Championship based on the available cars. The Honda Civic was well represented with the Zengő Motorsport version and the Castrol Team WTCC. There was just one small element that didnt favour the Hungarian teams car, it was slightly quicker than not only the Castrol version, but each of the different Touring Car based builds in the game, which means the Zengő Motorsport #5 Honda Civic has been shuffled out to the back and has been collecting dust ever since the release.

We at the VTCC tend to make our own Touring Car Championship's from the road going cars, its nothing against the fully fledged versions, but they are done elsewhere and we enjoy bringing something a bit different to the table, so for Season Ten of the friday Night Spec, and because its been requested that we need to run a FWD car, which is actually quite limited in choice in Forza 6, instead of building a road going version of a Honda up to a race car, we would take the Race Car version thats collecting dust and give it, its own six week series to round out the VTCC Spec Season for 2016, and give it a tour of the USA, a country which also doesnt host the WTCC anymore.

Qualifying will be starting at 20:00 UK Time, invites will be sent out from 19:45 so a quick response would be appreciated. Qualifying will be over just three laps, and as always, clean laps count above dirty laps, so no pressure then. The lobby will be set to 5 laps. Lap 1 will be your outlap, Laps 2, 3 and 4 your flying qualifying laps and after completion of Lap 4, if you could pull over at Turn One of Lap 5 so the lobby host can gather the times.

There will be two races per round, the first race will be set on the qualifying times and be a rolling start, the line up getting in position during this initial lap. The rolling lap speed will be 50mph and cars will be lined up in a single line rolling formation. The Pole Position winner will also be in charge of the start.

In a similar way to the starts in NASCAR and the restarts in IndyCar, there will be two designated points in the race day thread, the man in pole position can start anywhere between these two points and DOES NOT have to announce to the rest of the field when to go, theres no Green Green Green, 321 Go, the start is solely on the man in pole position.

Race Two will be a reverse top ten of Race One, the tenth place finisher in race one starting on pole. This will also now be a rolling start, single file at 50mph, with again, the person on pole being in charge of the start.

For full details, check out the www.vtcc.online forum and if your feeling lonely on a Tuesday, we currently have The Great British Bake Off, a duel between Jaguar and Aston Martin and coming soon, something that will keep the JDM fans happy!! 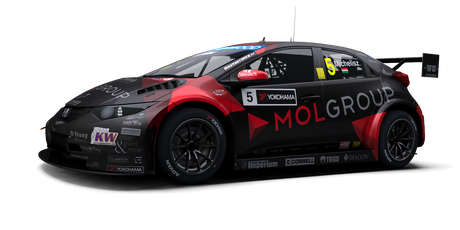 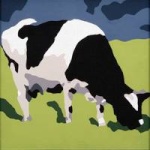 A few shots from the opening round at Indianapolis over the Classic GP Circuit, a track in which it appears i didnt know my way around and sucked at the pit strategy game, still, at least i didnt take flying lessons unlike ENS Cerberus!! From a media point of view, a big thank you to everyone with the efforts in the paint department, thats one mighty fine looking grid of cars. 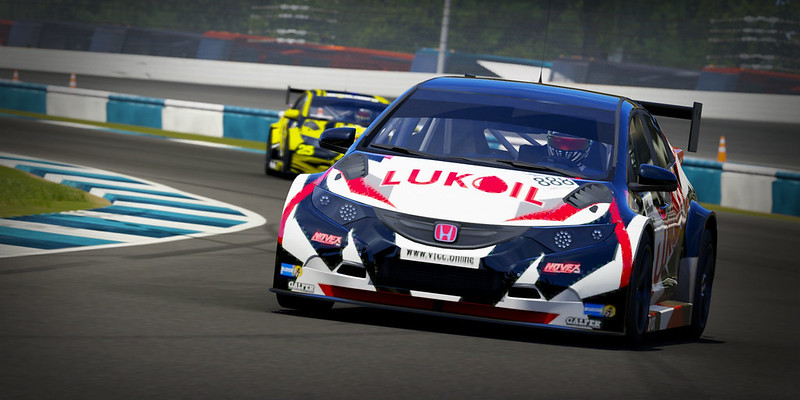 Long Beach, not everybodies favourite track, but the tight street circuit layout is something that i personally enjoy the challenge of and to celebrate some pretty quick for an old cow laps in practice, i came into the night in good spirits and proceeded to dirty every lap in qualifying! Thankfully the races went slightly better, well unless your called ATP Ginge who i closed the door firmly shut in Race Two............... Sorry!!

Anyway, its Long Beach so i have got carried away in the photo department so if your reading this on your cellphone, sorry again!!

Congratulations to MULISHAxTROOP24 on the pole in qualifying and the double in race wins and at this early stage, he is also the point leader after two rounds.
Staying in California for next week when the Mazda Raceway Laguna Seca becomes slightly more Hondafied!!

Round three of the Zengo Civic's saw 13 cars in the pits at Laguna Seca, i would at this point usually say a few lines as to what happened, but unfortunately i was busy treating a young family with colds, aches and pains instead, which trust me, wasnt a pretty sight by the time the Zengo's had finished.

PLOW tubbi and Freebie53 taking the wins on the evening and Jamie Anders0n already showing some Christmas cheer:- 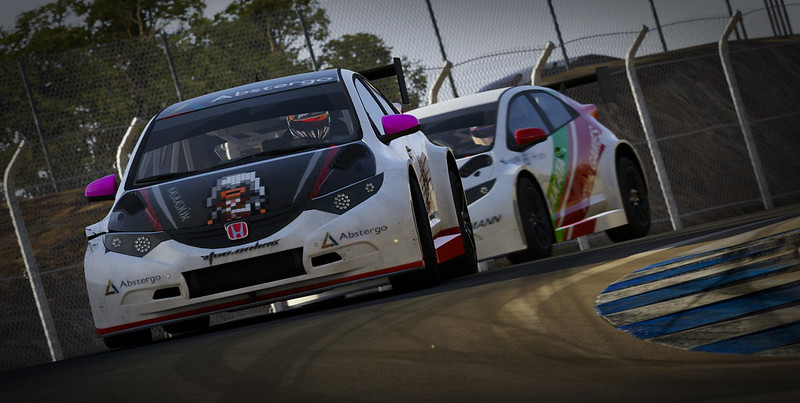 Next up is Road Atlanta on Friday 9th December, but if you cant wait that long and you like to have a race on a Tuesday, in both prime time EU and US timezones, choosing from a selection of 18 Japanese icon cars in an open build format, well you might want to check out 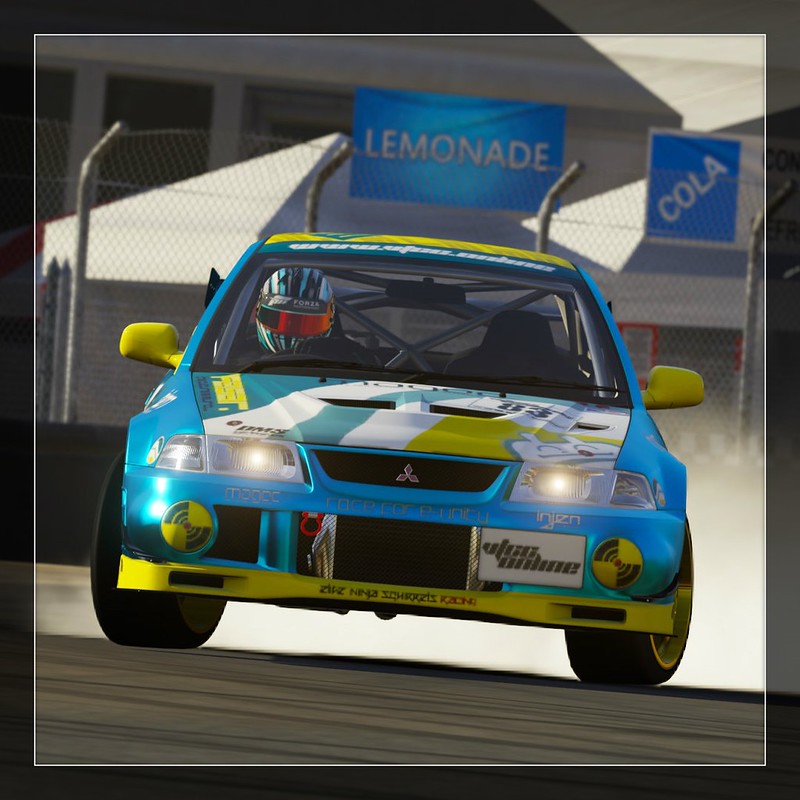 Road Atlanta was this week round for the Zengo's and a 14 car night was a more than welcome surprise with Australia, USA and the home shores of the UK in attendance. PLOW tubbi took the double on the night, but MULISHAxTROOP24 is hanging on to a slim two point lead in the overall Championship with two rounds left. 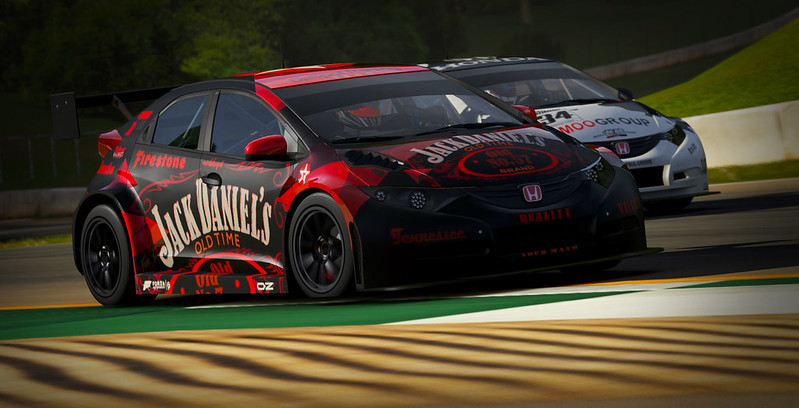 oh, and bored ona Tuesday evening currently, fancy a bit of Japanese action in both the EU and US Timezone prime time, just take a look at this taster.

Sonoma Raceway was the venue this week, and just the eleven drivers in attendance this week, but a big week for Slider S15, taking the complete sweep of pole position and both the races wins, setting up the Grand Finale at Watkins Glen, level on points with MULISHAxTROOP24.

It was down to a duel in New York for MULISHAxTROOP24 and Slider S15, with Freebie53 just ten points back in case the top two had issues, in the end the Rockstar #24 took a solid night and capitalized on a mistake from Slider to take his first VTCC Crown. A good night of racing, well it was till i hit the tyre barrier in front of the chasing pack, that didnt help my chances or DJProfessor's either, sorry sir!! 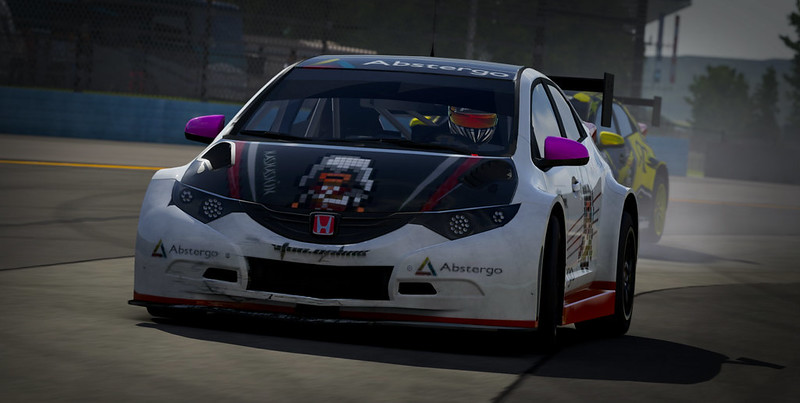