Today at 5:16 by TXR Trexosaurus

Yesterday at 17:26 by Koenigsegg R

Yesterday at 8:27 by Koenigsegg R

I came to this site after watching a video from Stella Stig. He seems like a cool guy! I am no stranger to racing. I grew up around my fathers garage and I raced BMX bikes in the 80's and 90's. I played Forza on the first gen Xbox, I skipped Xbox 360 and this past Christmas I decided to buy an Xbox One. I played Forza 5 and recently purchased Forza 6 along with the NASCAR expansion pack. My experience racing online has been a mixed one. I have had a few racers in the hopper lobby that the racers raced clean and a few races that felt like a demolition derby. Even after being rammed, I would try to out race them so they wouldn't ram me again. I look forward to making some new friends here on TORA. I hope everyone is having a great day! 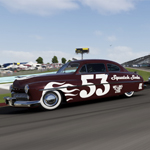 Thanks Mikey! Your avatar photo is awesome!

Thanks! I will be racing soon.